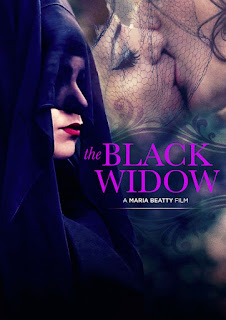 And that's not a fair review.

So, instead, I watched The Black Widow by Maria Beatty.

We begin with some fairly nice shots of a graveyard. A romantic goth clad lady prowls around, exploring and kissing he feet of statues. I assume she is in mourning. Meanwhile a figure with big feathered fans and a swan head for a crotch ornament dances about in the woods.Then we cut to the mourning lady presumably in the past. She's smoking and playing with a snake. Another woman comes to her and they have some fun together. They are accompanied by musicians played by actors who do not know how to play string instruments. The 'playing' of the instruments isn't synched with the soundtrack and it takes me out of the film.

Somewhere else, another couple of women are kissing, stroking and spanking. I am unclear what this has to do with the lady in mourning. Or even the swan lake understudy.

The film alternates between the two couples, and in flashback, the mourner and her lover play with candles in a too-short scene, and flick the dried wax off the skin with a knife. There's a gracefulness and level of precision to this scene that elevates it from most the others and it was far too short.

The blonde lady who enjoys spanking, hefts herself up on ropes from a rig and walks all over her submissive in ballet pointe shoes. It's a very creative scene and I found myself quite enjoying it.

The main lady walks through the woods and finds her lover, whom I thought was dead. They kiss and again, the main lady flashes back to a moment in time where she and another woman are bound back to back, with gasmasks tight around their faces and the hoses leading them to share breath. It's a striking shot that explains nothing.

I completely misinterpreted this movie. I assumed the mourning lady was mourning her lover/submissive who died or something. But according both IMDB and Letterboxd I am very wrong.

They say the following:

An enigmatic Andalusian tries to forget her former mistress sadistic, cruel and all other sadomasochistic pleasures.

I didn't get any of that. At all. It all seemed very consensual and caring to me.

There are really interesting uses of texture, particularly near the end where the thick, almost shining rope is in contrast with black lace. There are some nice shots and amazing physicality on the part of the performers. That ballet scene is going to stick with me for some time. The soundtrack is interesting, with one scene of sexual torment overlaid with sounds of moaning.

This movie comes across as Maria Beatty's pure id. This movie is hot, I guess, but I'm left asking Why? Who are these people? What's the story? Is there even a story at all? It's sexy, and it's certainly an adult film but it's too avant-garde for my tastes.

There was a time I would have loved this. This is something I would have sneaked to watch while a curious teenager flipping through channels but now it just leaves me confused and drained. This whole film feels like a performance art stage show stretched into a movie. I could have seen this on the stage at my local fetish club back in 2018.

Best Moment:The ballet shoe torture. Though she never grazed the soft satin of the shoe across her submissive's nethers, the creativity and physicality involved is memorable.