Girlcore: Rock You Like a Hurricane - Lilith Likes to Watch

There's no better form of advertisement than a good product. My enjoyment of Teenage Lesbian made me seek out more from GirlSway.com, and explore their offerings. So, that's what we're going to do for the next month. We're just going to watch season two of Girlcore.

The all girl rock bands Twisted Fister and MegaLez are both present to rock the Battle of the Bands, but a hurricane has cancelled the concert and the two bands are stuck in the venue. After they have their own private Battle of the Bands to see who's best, they end in a tie. So, there's only one way to settle this once and for all...

However, occasionally performers will be making a lot of pleasure-noises, but the action will be off-screen while the camera focuses on the other two ladies who are getting into position.. At least everyone was doing something, no one was left idling by but whatever was happening off-camera sounded interesting and piqued my curiosity. The camera man and editor's attention was unfocused.

While the acting and dialog was basic, the performers were able to convince me that the sex was amazing sex. Either Katrina Jade fucks and eats pussy like a god, or Lena Paul is super sensitive.

For a season opener, it's good. It delivers what it promised and ends on an amusing little joke. If you want to watch pretty girls in 80's hair metal accouterments fuck, you can't ask for anything more.

Best Moment: The chemistry between all the girls is really noticeable. They all seem to be enjoying themselves.

Worst Moment: They had Kira Noir and they didn't use her! What the fuck?

NEXT TIME: We continue with Girlcore Season 2 with Working for the Weekend. 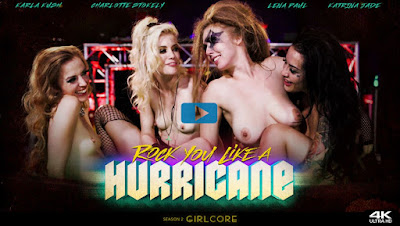 Email ThisBlogThis!Share to TwitterShare to FacebookShare to Pinterest
Labels: 2010s, Review, Review: GirlCore: Rock You Like a Hurricane, Score: 3

Get her latest book

Got a movie in mind for Lilith to watch?
Well then, click below.